For the reliable testing of single and bipolar plates

Electric drives will be dominating the automotive market in the coming years, while the number of vehicles with combustion engines will go down.

Hybrid and battery solutions will be the preferred option for passenger cars in the near future, but the use of fuel cell drives and the use of hydrogen as fuel will have a high significance as well. Particularly for heavy load transport, commercial vehicles, vessels, aircrafts and public transport fuel cell fuel cell drives are a real alternative. Short re-filling cycles and a sufficient operating range are the main advantages of this concept. If the hydrogen is produced with alternative energies (e.g. wind turbines or solar power), the ecological balance is positive (“green hydrogen”).

A fuel cell mainly consists of an anode, a cathode and in between layers of so called “bipolar plates”, which are separated by a membrane (gas diffusion layer).

This electric current can be used to run an electric drive or charge a battery.

The hydrogen ions unite with the supplied oxygen to water or steam which leave the process as exhaust.

A main part of the fuel cell are the bipolar plates. It is very important for the process that the bipolar plates are leak free and no gas can pass the intended process because of leakages. We have developed a helium leak test to check the plates.

This device is able – with the specific tooling – to test single plates as well as bipolar plates. During the test cycle the different circuits are leak tested against each other:

The design of the leak test follows a modular concept, starting with a main module, which includes the switching cabinet and the operating panel. This module is a manually loaded and unloaded unit which is feasible for testing of small series and first prototypes. 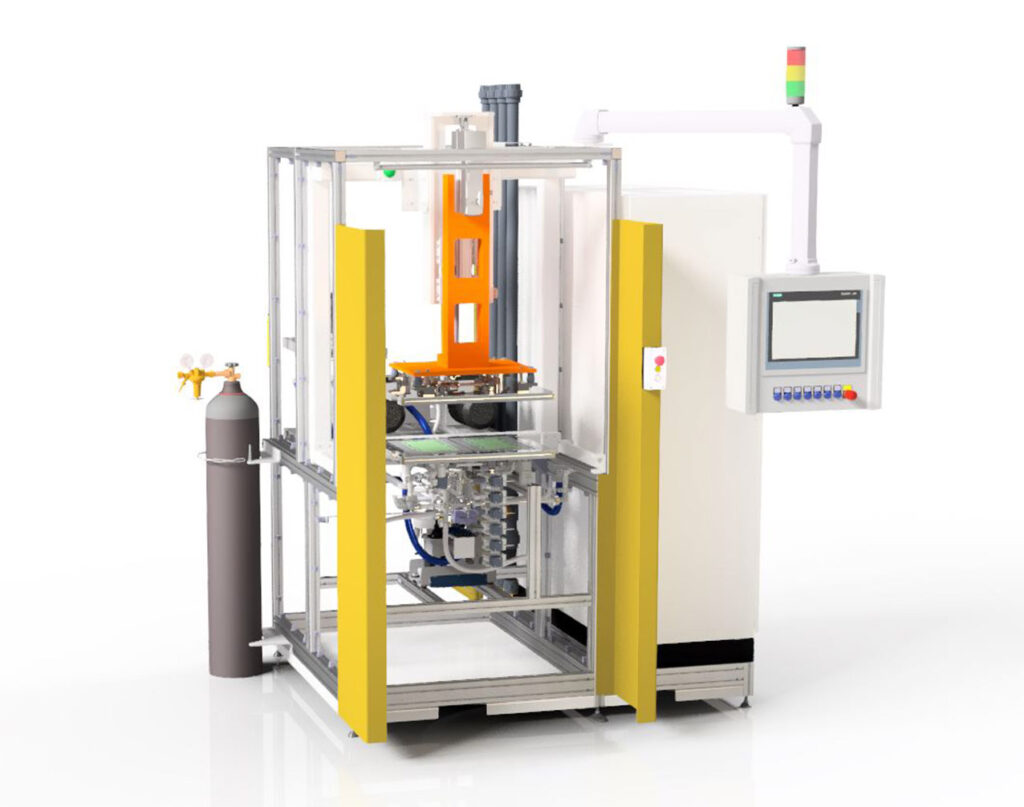 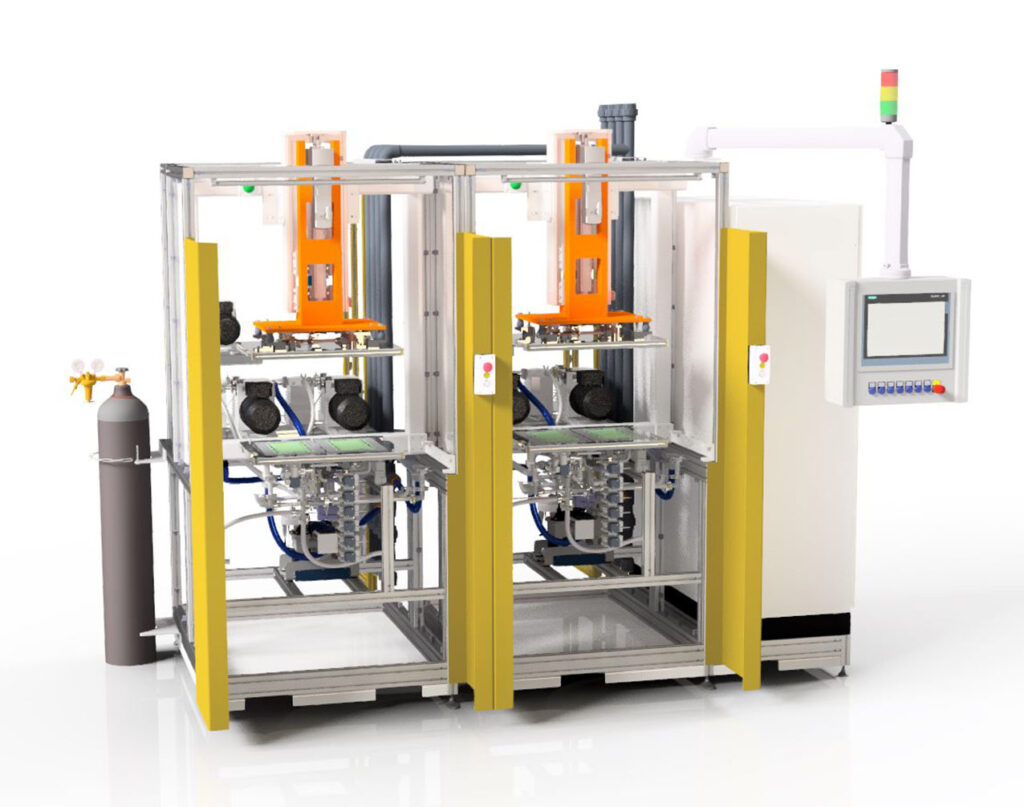 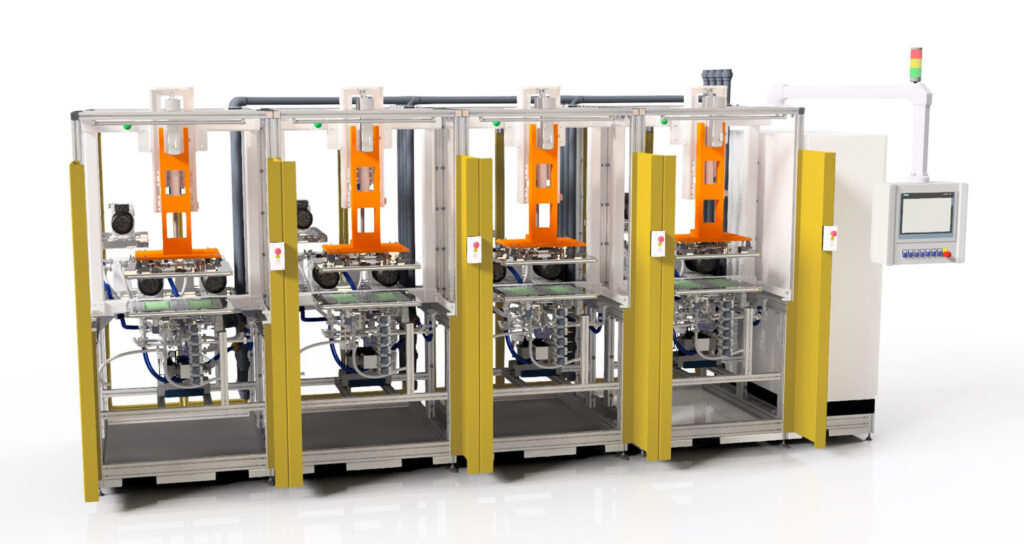 The following options are available as upgrades: 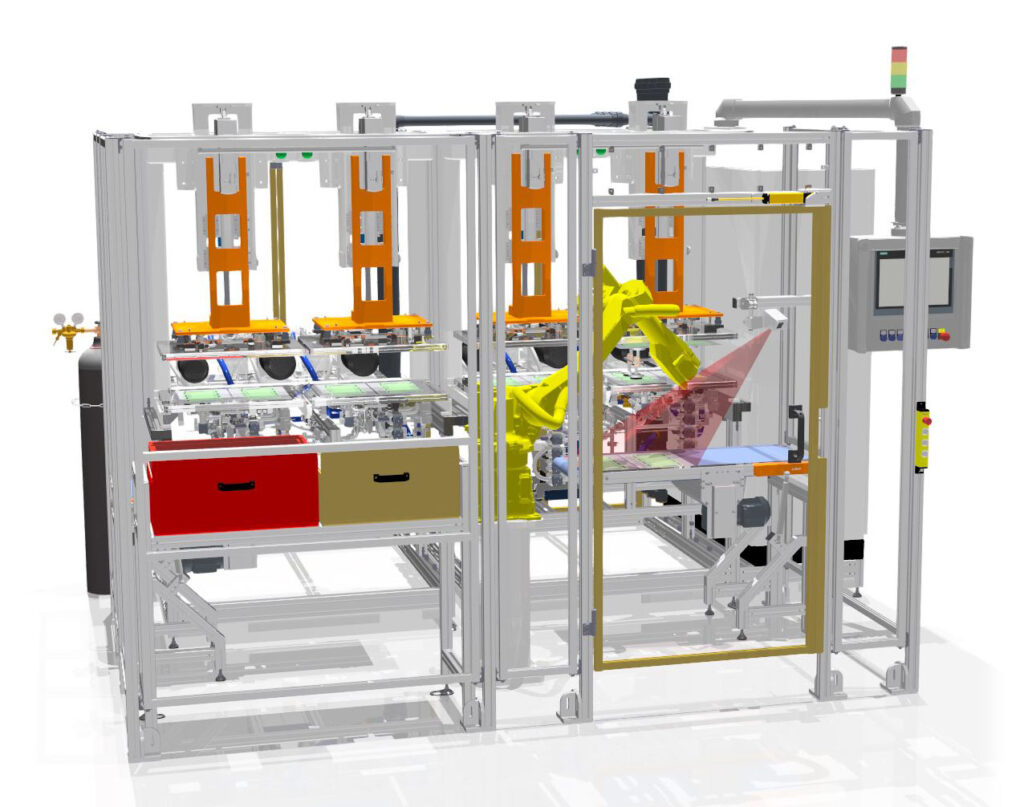 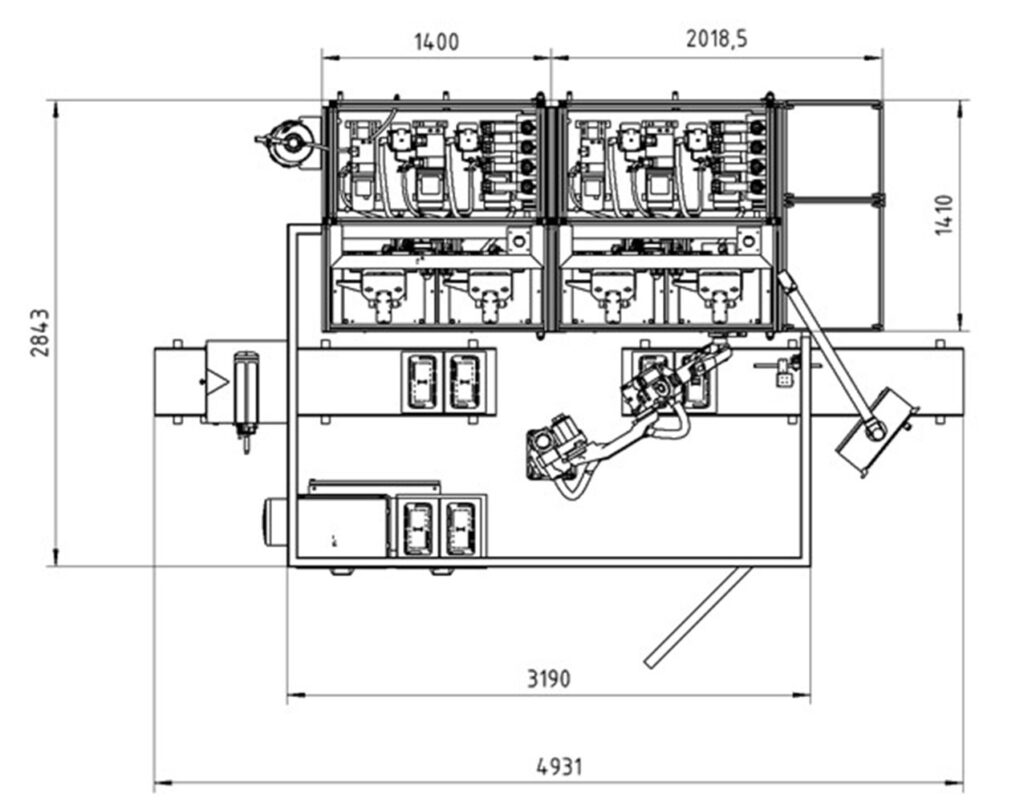 Details of the helium leak test

The test parts are positioned in the lower half of the test chamber by using locator points and the parts are then fixed by a vacuum system. Each module tests two parts at a time. As soon as the parts are loaded and fixed, the chamber closes, and the helium leak test will be executed. After the test cycle the chamber opens and the tested parts can be taken out. 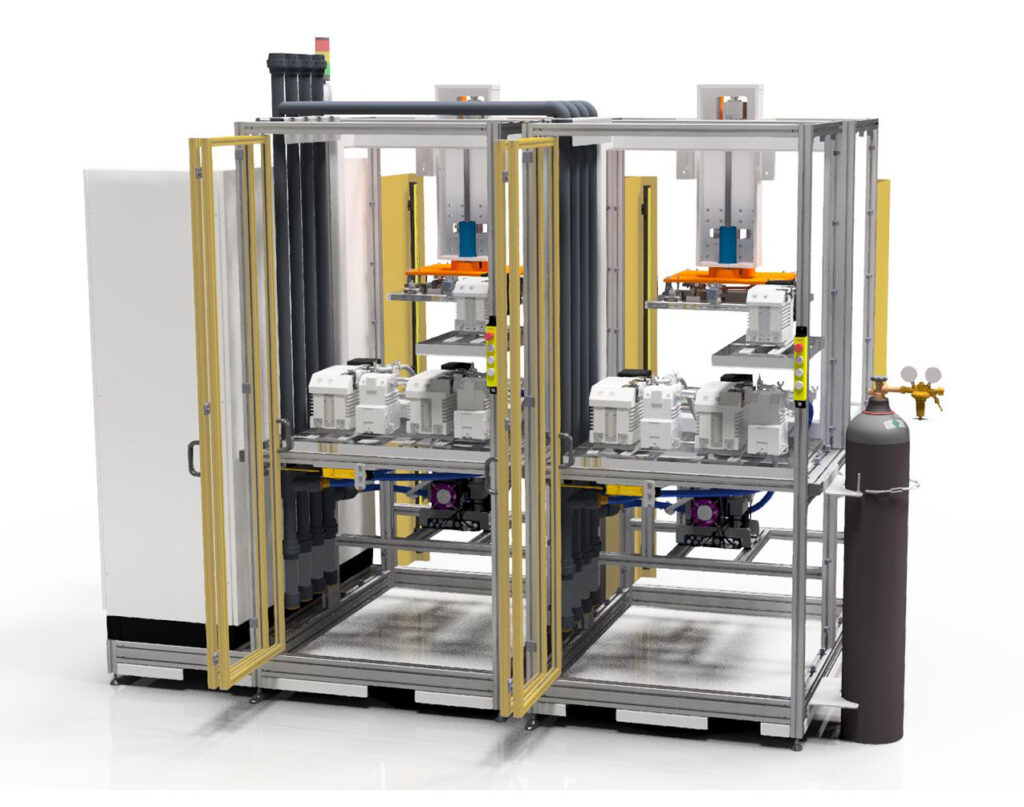 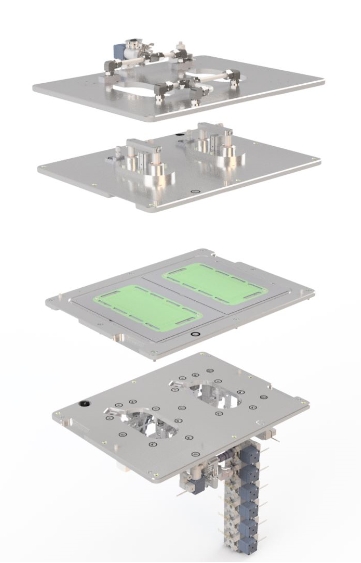 Setup of the test chamber and the exchangeable inserts

Each test chamber can be equipped with a separate set of pumps and a mass spectrometer.

The module is very well accessible for maintenance through the large service doors on the rear side. The tool change for the product specific parts in the test chamber has to be done from the operator side (front side). The tool change can be done by one person within a few minutes. 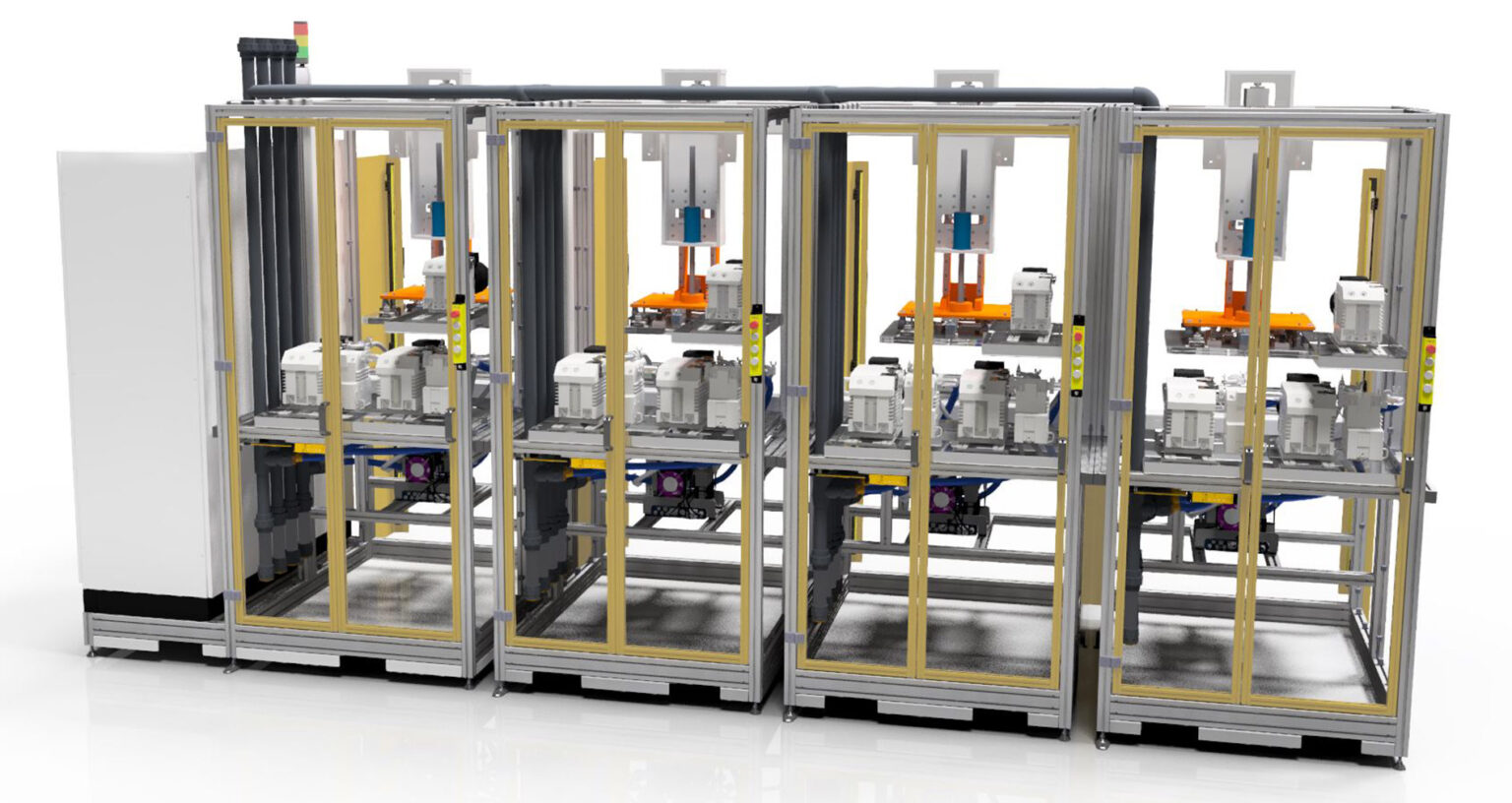 Rear side of a 4-module device with service doors